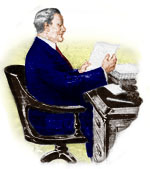 "What a beautiful typewritten letter–as plain as print–as easy to read as a primer! It must be the new Oliver PRINTYPE! I wish all our correspondents used The Printype Oliver Typewriter!"

-a composite quotation from ten thousand business and professional men on being introduced to Printype.

At the Oliver Typewriter Company, all eyes were watching Printype. Its attraction was considered irresistible by them. Its beauty and grace, in a typewritten letter, were described as alluring, attention-compelling. Although absolutely new to typewriting at the time, its counterpart–Book Type–has been used on all the world's presses since the printing art had its inception. It was the Oliver ideal of perfect typography applied to typewriter uses.

They claimed to have had brought the machine to its maximum of efficiency. They had added, one by one, a score of great innovations. There remained but one point at that time-that was the type itself.

Then came the inspiration which meant a revolution in typewriter type. They would design and produce a new typewriter type face, conforming to the type used in newspapers, magazines and books.

They Did! It was there! It's PRINTYPE!

Printype was not an experiment (Patented November 6th 1912). It appeared as an option on every model since it was introduced in 1912. It was promoted to be, in all essentials, the type that meets your eye when you read your morning paper, your magazine or your favorite novel. When Printype was an accomplished fact, the thought might have occurred to thousands (at the likely prompting of sales agents), why didn't typewriter manufactures think of it years before it was introduced? The same question (also, likely prompted by sales agents) was asked when, over ten years before, they introduced visible writing.

A Long Step in Advance

The change from the old style thin outline letters known as Pica Type, universally used up until then on all standard typewrites, to the beautiful, readable Printype, was one of the vast significance. It advertised relief from the harmful effect on eyesight of the "outline" typewriter type. For Printype was thought to be as easy to read as a child's primer.

It claimed less liability of misreading, due to blurring of outline letters, whose sameness frequently makes the words run together. Printype letters are shaded, just as Book Type is shaded.

It also advertised less danger of costly errors, due to confusing the numerals. It was also thought that there was no possible chance of mistaking 3 for 8 or 5 for 3—each figure in distinct. They claimed a degree of typographic beauty never before known in typewriting.

And then, because of its newness, it had the enhanced charm of novelty.

The reception of Printype by the business public was considered to have been most enthusiastic. The Oliver Typewriter Company withheld formal announcement until the machine had been on the market for one year. Personal demonstrations were its only advertising. The resulting sales were considered stupendous. Printype letters soon began to appear among commonplace old style correspondence. Whenever received, these mysterious, distinctive, beautiful letters awakened immediate interest. Business men began asking each other: "What's that new kind of typewriter that writes like real print?" Thus the fame of Printype grew as its beauty and utility dawn on the business world.

The manifold merits of Printype were advertised as a constant source of surprise. Printype was described restful to eyesight. It delivered its message in the most easily readable form.

They claimed that the constant reading of thin outline letter typewriting played havoc with the eyes. If true, it sent thousands to oculists and opticians.