By Shannon L. Johnson, using the Analysis of Typewriters format as published in the Business Machine and Equipment Digest.

his model was introduced in 1901, based on third party serial number lists, and patents. In February of 1902, US Patent Nos. 693,033 and 693,057 where issued to Theran. L. Knapp and Thomas Oliver, respectively. Knapp's patent depicts the design concepts seen thought this model line; while T. Oliver's patent related to an improvement to the paper guide. Both patents where applied for in 1901. The most notable difference between the No. 3 family and its predecessor, No. 2, is the greater thickness of the No. 3's base.

The primary model, the No. 3, has 28 keys, while the No. 4 has 32 in order to accommodate accented languages. The No. 3 was produced first, it is unknown to me when the No. 4 was introduced. A little known variant is the Canadian Oliver No. 3, manufactured by The Linotype Company of Montreal; only one is known to still exist. The Oliver No. 3 and Canadian Oliver No. 3 appear to have been produced concurrently. Whether production of the No. 3 continued in Canada after Oliver's Woodstock factory began producing the No. 5 is unknown.

The No. 3 was also produced in Vienna, Austria by A. Greger & Co. from 1903 to 1924 as the Courier; production ended in 1919, the final machine was assembled in 1924. They also produced the Courier as the Jacobi for a major German office equipment dealer in Munich; The Jacobi name was borrowed from A. Greger's sewing machine division, the Jacobi Company. A. Greger & Co. was originally a bicycle builder. A. Greger & Co. may have been been the manufacturer or assembler of Oliver branded Typewriters Nos. 3 & 4 prior to purchasing the patents from The Oliver Typewriter Co.; research is on going concerning the early years of Oliver in the Europe.

All keys have the standard distance between each, making this model suitable interchangeably with other office typewriters once comfortable with the double-shift mechanism. It came standard with a 9-inch carriage and could be ordered with longer carriage-rails to accommodate longer carriages. Oliver designed their carriages to be remarkable easy to remove allowing for multiple carriages for different tasks (i.e., stenciling, single page, multiple carbons, index cards, etc.) to maximize type slug life time. Early in the life of this model the feet where moved from independent posts in the interior to the inside edge of the base sides. The keyboard was equipped with left hand shift keys, left hand line space and carriage return Thumb-Wheel, standard 1-color ribbon with manual reverse; variable line spacer on the left side of carriage; and carriage release lever at both ends of carriage.

General Features: Standard size, down stroke, double (carriage) shift, visible writing. May or may not have case, usually oak base and tin lid with leather handle; leather cases where available but they may not have survived. Cleaning tools and basic instructions where included with every new machine.

Keyboard: Three rows. The regular model has 28 keys writing 84 characters; the No. 4 has 32 keys writing 96 characters, up to four keys could have been "dead" (i.e., these four keys are not connected with the spacing mechanism and are used for language accents), 28 "live" keys being needed for English alphabet. Left hand shift key with left hand shift lock and release. The right margin release key is located between the type-bar towers, above the keyboard. Left margin release key is found above and to right of keyboard. 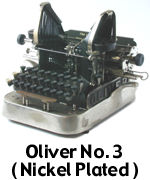 Carriage: Interchangeable, mounted on roller bearings; standard correspondence model, takes paper 10 inches wide, writing a line 8.5 inches long: rotary escapement; paper feed rollers extend entire length of carriage. Line space and carriage return operated from left platen knob with an adjustment for single, double or triple line spacing and ratchet release. Variable line spacer; adjustable paper fingers. It is not widely known whether Oliver could/would be build the carriage to move from left to right to write Hebrew, Arabic, and such languages. Medical and Billing keyboards where advertised, Engineering and other professions would likely have also had keyboards (anyone with an Oliver Key Board and Special Type booklet has a complete picture of available keyboard layouts).

Printing Mechanism: Type bars of distinctive "U" shaped or arch design are mounted on either side of the printing point, held at both ends of the axis and strike downward on the platen.

One-color, nine-sixteenths inch ribbon with manual reverse and stencil throw-off. An indicating device denotes the exact print point, moving out of the way with the downward stroke of the type bar.

Serial Number Schemes: The Oliver No. 3 follows the scheme domestic American scheme. The No. 4 follows the 'Export' scheme that continues with No. 6 and beyond; these usually have a letter, 'D', followed by the number. The Canadian Oliver followed its own serial system. A. Greger appears to have included the Jacobi's serial numbers within their Courier machine serial scheme.

Construction: Most of the mechanisms are affixed to the top of the base. Size of machine, 14-1/2 x 14-1/8 x 10-1/2 inches; outside dimensions of case, 16 x 15-1/8 x 12 inches. Weight: 22 pounds without case; 26 pounds with case. Oliver & Canadian Oliver Finish: Nickel plated or olive green; keys where either basic white (most common), basic black or molded celluloid covers over basic blank keys. Courier and Jacobi Finish: Olive green or black enameled base; keys where furnished with white, nickel ringed keys similar to conventional typewriters of the time. All machines was trimmed with nickel plated parts. The Canadian Oliver's most notable difference from any of its sister machines is the vertical ribbon boxes. Known type faces: Standard Pica Type, Elite Type, large Roman Type a/k/a Preachers Type.