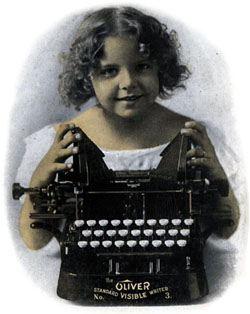 The History of
The Oliver Typewriter Co.

he Oliver Typewriter was the creation of Rev. Thomas Oliver, born in Woodstock, Canada in 1852. He was reported to be a committed Methodist, as a young man he answered the call and served as minister in Epworth, Iowa for a time. According to lore, he designed his writing machine without ever seeing any of typewriters available at that time. The prototype for this unique machine is rumored to have been made of strips of tin cans, the first of his several typewriter patent, US Patent No. 450,107 from 7 April 1891, shows some support for that rumor.

The Oliver Typewriter Company began operating as a corporation in 1895. In 1926 the company stopped production and the board decided to liquidate the company. They retained one employee, Chester Nelson, to oversee the liquidation of the Oliver. Production was then resumed in England by the British Oliver Typewriter Company, and later they sold Oliver branded machines developed by other firms.

The general design of the Oliver Typewriter remained mostly unchanged for most of its early history. Production of the Oliver No. 1 began in the fall 1894. The Oliver No. 2 was introduced in 1896. The Models No. 3, No. 5, No. 7, No. 9, and No. 11 were introduced in about 1902, 1907, 1914, 1915, and 1922, respectively. Oliver finished their machines in varying shades of olive green enamel or full nickel, with a white or black keyboard depending on the customers preferences. If customers did not specify the finish and keyboard color they wanted, the company would use its own judgment in filling orders, which appeared to be the olive green enamel and white keyboard. The last model produced in the United States was the Model No. 11, this model lost the familiar handles and color. Oliver may have offered other color variants however no documentation has been found. What is known is that some remanufacturing companies refinished some Olivers in various colors; gray, maroon, black, etc...some machines may even have had new decals added.

When production moved to Croydon, Great Briton in 1928, the Model No. 15 was introduced — the No. 15 continued until about 1934. By that time, British Oliver had been producing a standard, 4-bank portable since 1931. Also, at around 1934, they either began producing licensed clones of the Helda 10 office typewriter or simple re-branded Helda produced machines. The British Oliver–Helda relationship would continue though 1959, the year British Oliver ended their existence as a manufacturer and seller of typewriters.

During WW II the British government placed large orders for the discontinued Oliver No. 15 due to the classic Oliver's reputation for durability and reliability. The order for these old No. 15's and new No. 16's, standard correspondence and wide carriage models, respectively, required that British Oliver retool their factory to fill the orders. Their portables and Helda re-brands continued to be produced during the war. Nearly every typewriters manufactured went to the war effort, few machines saw civilian use until after the war, the government needed every typewriter it could get.

During the existence of The Oliver Typewriter Company, version of various models appeared under different names, some times from different companies. A cheap version of the No. 2 was called the Woodstock — it died a quick death, only 19 machine being made. The Oliver No. 3 family included the Canadian Oliver No. 3 and the Austrian made Courier and Jacobi machines. The No. 5 was sold under the names Fiver and Revilo. Several machines across the classic production include British distributor and Stolzenberg — the German distributor — labels. Oddly enough, prior to the move to Europe, the engineers at Oliver designed both a 4-bank office machine and a potable model that had U-shaped bars that hit the front of the platen. A cover story about the office model is in the February 1989 issue of ETCetera (ETCetera No. 6).

he Oliver Typewriter Company began its corporate history in 1895 in an office building on the northeast corner of Clark and Randolph Streets, Chicago. They occupied just two rooms on the ninth floor. Then in 1907 the first five floors of the Oliver Building ( Pict. 1 ) were build at 159 North Dearborn Street in Chicago. Holabird & Roche were the architects on the project, they were also the architects for the 1920 addition of two floors ( Pict. 2 ). Holabird & Roche is still in business in Chicago today. This building served as the world headquarters for the Oliver Typewriter Company until 1926. The building is covered with many cast iron advertisements and ornaments.

he Oliver Factory was located in Woodstock, Illinois on a roughly 12 acre lot bounded by First Street, Clay Street and the Union Pacific railroad. An earlier factory site may have been 542 Washington Street, Woodstock. Even though the main offices where in Chicago, this was considered the home of The Oliver Typewriter Company. Employee recreational activities included a company band, a women's baseball team, and a semi-pro baseball team named, ironically enough, The Olivers. Oliver built a bandstand for the Oliver Typewriter Band in Woodstock's Square in 1908.

At least one Oliver employee, George Moriarty, went pro because of an exhibition game in 1903 between The Olivers and the Cubs. He would play for the Cubs, Yankees and Tigers before retiring as a White Sox after 14 years as a player. He would spend 55 years in baseball, mostly as an umpire, but he did spend two years of his career managing the Tigers.

The 1904 St. Louis Fair had a Golden Oliver on display. Oliver offered a small mirror as a premium for a time, latter British Oliver would offer a sharpening stone. Numerous of the buyers premiums were doubtlessly offered and are much sought after.

Sources: Addition Information (not used for this article)